A tribute album to Martin Stephenson featuring selected guests covering their favourite songs has finally been released The Great North Light and includes Gary O’Dea’s cover of Martins 80’s indie classic Crocodile Cryer . The idea was the brainchild of Pete Shields a musician / songwriter and promoter in his own right and another fellow musician/songwriter and long time fan of Martin’s – Rob Metcalf.

It’s a wonderful collection of songs and artists and includes amongst others :-

Gary’s version of Crocodile Cryer was recorded back in Feb 2008 down in Portsmouth and on the recording he is accompanied by the wonderful Amanda Evans on backing vocals and Nick Poore from the Portsmouth based band Angelgear…a brilliant acoustic based band that Gary had gigged with at the time. 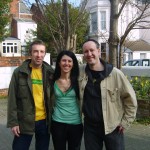 It’s great that the album has finally been released – hit the links and have a listen…and purchase it…it was a pleasure to be a part of.