A few weeks ago I saw an old mate (Mark Smith) in a pub who came up to me and mentioned an old song from my days in The Love Hounds a song called One Shot Pistol, it was a little chilled blues song…anyway – last night I found the demo tape and played it…FUCKIN HELL IT WAS GOOD! 🙂

The band was a garage punk / maximum R&B / rock n roll band – we were a fish out of water in the 80’s – all that shoe gazing nihilist stuff wasn’t for us…we wanted to rock n roll and dance. Some people got the groove, the idea, some people loved us…a lot just didn’t get it. We fitted no description other than the one I’ve given above, we weren’t pop, we weren’t alternative (although we were in a way 🙂 – we certainly were not a RAWK Band…cos we added the Roll bit with abundance…and it was the best band I’ve ever been in…from an ‘us against the world’ point of view…we were more like a gang!

It’s a 5 track demo cassette we recorded live back in Sept 1987!!!!…at RPK / Wreckless Studio in Lye, Stourbridge. It was called ‘Five Live Love Hounds (and a drink or two)’ the track listing is as follows…

Here’s some great pics of us…to quote Rod Stewart ‘my dad said we looked ridiculous…but boy we broke some hearts’! 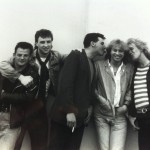 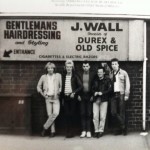