6pm Gary O’Dea – live solo acoustic – in the bar followed by a special screening of Still The Enemy Within http://light-house.co.uk/calendar/2014/08/still-the-enemy-within/  DO NOT MISS…
As a musician and songwriter in the 80s Gary was a supporter of the miners campaign – here’s the original version of ‘You Oughta Burn’ recorded by Gary’s band in the 80’s The Love Hounds that featured on Gary’s debut album ‘Love Hounds & Fortune Cookies http://garyodea-gojomusic.bandcamp.com/track/you-oughta-burn which was written about Thatchers reign.
Plus here’s a recorded dvd version from 2012 recorded live at The Lighthouse with Gary’s then line up Cosmic Souls https://www.youtube.com/watch?v=iHag2_-CmOg&list=UUqpjX7_hGFcz-KoC8WnsT0w

Still The Enemy Within http://the-enemy-within.org.uk/
ALSO…another one for your diary…
Tuesday 18th November @ The Lighthouse Media Centre Wolverhampton…Black Country Echoes presents
6pm Gary O’Dea – live solo acoustic in the bar followed by a special screening of Ken Loach’s The Spirit of 45 http://light-house.co.uk/calendar/2013/03/the-spirit-of-45/ one of the most inspiring and important documentary films ever made. The film includes interviews with people on how the spirit of unity which buoyed Britain during the war years, carried through to create a version of a fairer and more united society in the immediate years after the war ended.
Gary comments ‘I saw it on it’s release at the Lighthouse in April 2013…it was just as Thatcher had died ironically… it was like a chat with my old grandad bless him. When I came out the cinema a guy said “bit of a socialist dream”…I replied “well you’ve now woke up and back in a capitalist nightmare”!
I so want this nation to please wake up and rebuild a Socialist LEFT, built on the principles and values of what Ken Loach highlights in this film…we need to (pardon the pun) look forward by thinking back and we need to protect it from all and any that seek to infiltrate it and damage it, a healthy honest pragmatic and strong one for the common man / woman…there’s more of us than any other’s. I’m thrilled to be taking part in this evenings events. Wake Up…the witch is dead…we now have to take on her ‘bastard son’s and daughters‘!
The Spirit of 45  http://www.thespiritof45.com/
LAST BUT BY NO MEANS LEAST….Don’t forget tomorrow Sat 18 Oct:
The Combermere Arms, Chapel Ash, Wolverhampton, WV3 0TY.
Tel: 01902-421880. http://officialpubguide.com/pubdetails.php?pubid=498
COZY UP AT THE COMB… A regular Wolverhampton gig for Gary – Great ales and wines – cracking little pub and atmosphere – Gary will be doing 2 sets starting at 8:30pm…this could be outside under cover with the heaters on as is the custom and quirky trait of playing The Comb…wrap up warm…and partake in a brandy or two…the craic is always mighty  …and don’t worry – if it’s too cold it’ll take place inside…just turn up – it’ll be sorted on the night  Free admission.
For more info visit: https://www.gojo-music.co.uk/
https://www.facebook.com/GaryODeaGojoMusic
@gojomusic1 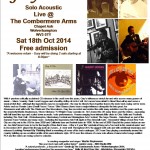