As a musician and songwriter in the 80s Gary was a supporter of the miners campaign – here’s the original version of ‘You Oughta Burn’ recorded by Gary’s band in the 80’s The Love Hounds that featured on Gary’s debut album ‘Love Hounds & Fortune Cookies http://garyodea-gojomusic.bandcamp.com/track/you-oughta-burn which was written about Thatchers reign.

Plus here’s a recorded dvd version from 2012 recorded live at The Lighthouse with Gary’s then line up Cosmic Soulshttps://www.youtube.com/watch?v=iHag2_-CmOg&list=UUqpjX7_hGFcz-KoC8WnsT0w

Pic 2: Gary with the wonderful Jean Gittens @ The Casa Bar, Liverpool 1/6/13 for the Radical Liverpool gig. Jean – a Miners wife and mother – became engaged in the strike and began writing and performing her poetry in support of the cause. 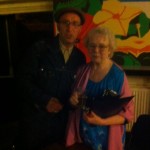 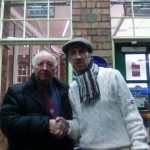 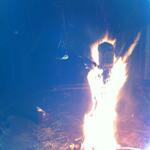 Still The Enemy Within http://the-enemy-within.org.uk/

1 thought on “Gary O’Dea – Still The Enemy Within…”